Mini Gastric Bypass (MGB) is a newer version of Roux-n-Y Gastric Bypass (RYGB) that has gained notoriety in recent years. The MGB is not only a more straightforward procedure than its counterpart, but it also has less chance of complications. Yet, the mini-gastric bypass still produces similar results for weight loss and type 2 diabetes remission.

One uncommon side effect of mini gastric bypass surgery is bile reflux. Bile reflux happens when intestinal juice backs up into the gastric tube (new stomach) and sometimes into the esophagus, creating a burning feeling. It has maximum occurrences of about 3% to 5% in patients with this procedure.

The surgeon’s technique plays a vital role in the likelihood of having bile reflux after mini-gastric bypass surgery. The best network of surgeons working with Mexico Bariatric Center, like Dr. Valenzuela, has extensive experience in MGB.

To understand why Bile Reflux Gastritis (BRG) occurs, we must first recognize how the mini bypass surgery works. 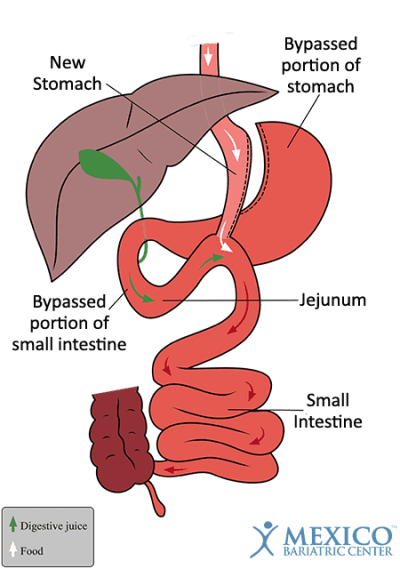 During the Single-Anastomosis (mini) Gastric Bypass (SAGB), or single-loop gastric bypass, the surgeon forms a small stomach pouch and then jumps a portion of the small bowel. Food can travel straight down the stomach, bypassing a part of the intestines in a direct, malabsorptive digestion process. This “gastric passageway” is the leading cause of bile reflux.

What is Bile Reflux?

Bile is a detergent-like fluid produced in the liver and stored in the gallbladder used to break up fatty food. This essential component aids in the liver digestive process, especially after a malabsorptive weight loss procedure like a mini bypass.

Bile reflux is a gastrointestinal condition where digestive juice moves in the opposite direction from the liver into the stomach and perhaps to the esophagus.

Bile reflux is often a misdiagnosed condition with profound implications. In the absence of bariatric surgery, Acid Reflux and Bile Reflux can occur as follows:

Acid reflux is the backflow of stomach content accompanied by gastric acid into the esophagus. Chronic acid reflux can result in GERD. When the lower esophageal sphincter valve (where the esophagus meets the stomach) malfunctions and does not close properly, acid gets flushed back.

Bile reflux is a first-stage problem that is often associated with acid reflux. Not to be confused with acid reflux or GERD, bile reflux is the backflow of bile into the stomach due to the pyloric valve not closing all the way. When the esophagus valve and the pyloric valve do not function correctly, then stomach acid, biliary liquid, and digestive juices from the small intestine flow through the stomach into the esophagus.

Signs and Symptoms of Bile Reflux

It can be challenging to differentiate between acid reflux and bile reflux. Symptoms of having bile reflux include;

If you throw up brownish-greenish thick liquid immediately after eating fatty foods, that is an indication that you might have bile reflux.

Why Does Mini Gastric Bypass Cause Bile Reflux?

Studies have shown that mini-gastric bypass may stimulate bile reflux as a side effect, mostly if done as a sleeve gastrectomy revision.

Bariatric surgeries, like Roux-en-Y and Mini Bypass, cause bile reflux due to the changes in the anatomy, i.e., pyloric valve. In these procedures, the pyloric valve is no longer a part of the food digestive tract, and it is bypassed. Essentially, there is no valve to stop the backward flow of digestive juices.

Bile is alkaline (hydrochloric acid) in nature, which dissolves the fat and neutralizes the stomach acid. This reflux of bile into the stomach and esophagus can cause hazardous internal problems.

One type of bile reflux is known as the Duodeno Gastroesophageal Reflux (DGER) or duodenogastric reflux. This gallbladder condition arises when digestive bile and others change the esophagus cells’ structure and may cause Esophageal cancer. 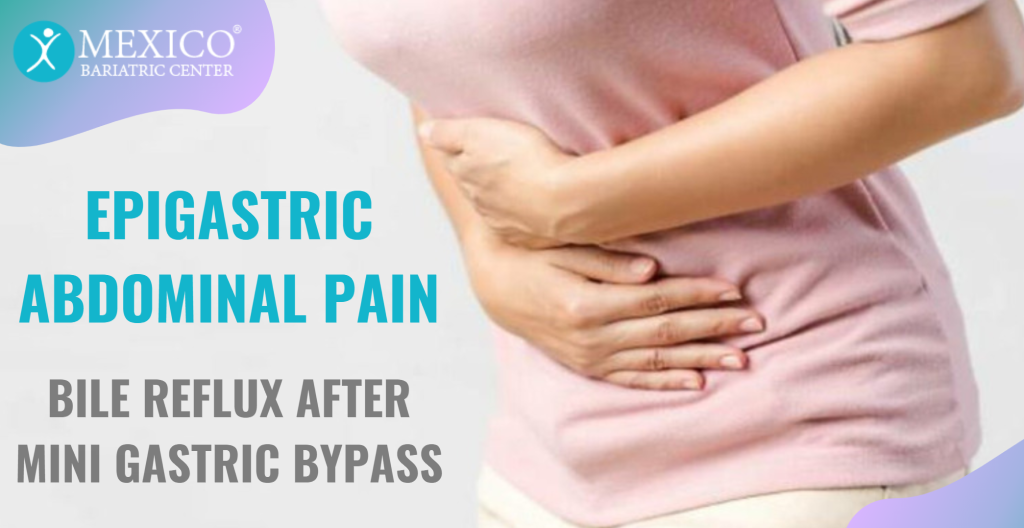 Bile, produced in your liver and stored in your gallbladder, is essential for digesting fats and eliminating worn-out red blood cells and certain toxins from your body.

Bile reflux gastritis/esophagitis is a possible side effect of the mini-gastric bypass. Proper surgical techniques, such as a long narrow gastric pouch, or stomach, can decrease the chance of transient bile reflux.

Natural remedies are lifestyle changes that you can easily incorporate into your daily routine. Consult with your local doctor to find out what’s the best treatment options for your individual needs.

Eating a meal that contains even a small amount of fat signals your gallbladder to release bile, which flows through a small tube into the upper part of your small intestine (duodenum). Avoiding fatty foods is one of the best ways to reduce bile reflux.

If home remedies and medical therapies, like Baclofen and Citalopram, are not effective, then surgical treatment may be a viable option. These operational procedures include;

Laparoscopic Mini Gastric Bypass is suitable for patients with more medical issues that need a procedure with fewer risks and less possibility of complications. Here are the occasions where MGB is considered over RYGB,

However, there is slightly a higher chance of bile reflux and biliary gastritis in “mini” gastric bypass compared to “RNY” gastric bypass. Expertise and experience of the best bariatric surgeons working with Mexico Bariatric Center® (MBC) minimize the bile reflux side effect in MGB patients. Surgical teams working exclusively with MBC recommend SAGB patients stay three nights in the hospital to ensure they have no bleeding or obstruction.