Are you unable to overcome obesity? Have you tried to lose weight with diet and exercise but were unable to maintain the weight loss? If your body mass index is 45+ or you are revising a previous surgery, the duodenal switch surgery in Mexico is a viable option. you should consider the affordable, all-inclusive bariatric procedure that we offer at Mexico Bariatric Center®.

What is the Duodenal Switch?

Duodenal Switch Surgery (BPD/DS) is a highly effective, yet complex procedure designed for morbidly obese patients. The DS is a highly complex surgery that is considered the most aggressive type of weight loss surgery. It provides a long-term solution for rapid weight loss and the management of obesity. Both variations of the procedure, the Biliopancreatic Diversion with Duodenal Switch (BPD/DS) and the Single Anastomosis Duodeno-Ileal Switch (SADi-S), have been found to be effective in reducing obesity-related health problems such as type 2 diabetes, hypertension, and sleep apnea.

Find out if you qualify for duodenal switch surgery

How Much Does Duodenal Switch Surgery Cost?

Due to its level of difficulty and expertise needed, the cost of duodenal switch surgery is relatively high, and difficult to find a surgeon specialized. The price associated with the DS procedure can range from $7,500 to $32,000 depending on various key factors.

Keep in mind that this is a general estimate and that the cost can vary greatly depending on the individual case.

Mexico Bariatric Center® has two of the most experienced laparoscopic duodenal switch surgeons, Dr. Rodriguez Lopez and Dr. Jacqueline Osuna. Compared to the world, we are a high-volume duodenal switch center that provides an all-inclusive surgery package for one of the most affordable prices.

Affordable Duodenal Switch pricing starts at $7,995 with Mexico Bariatric Center.  Start by filling out a health questionnaire to get approved and to receive an exact quote for your weight-loss journey.

Duodenal switch pricing is quite high for uninsured or under-insured. It varies based on location, the surgeon’s experience, the surgical facilities, and what is included in the all-inclusive package. Duodenal Switch surgery can easily cost $25,000 and $38,000 in the United States and Canada. The price is significantly lower at surgery centers in Mexico, where the level of patient care and safety standards are rising.

The cost of undergoing Duodenal Switch in Mexico is between $8,000 – $12,000; saving medical travelers roughly about 78% compared to the United States.

The gastric reducing duodenal switch (GRDS) is a ‘last-resort’ surgery reserved for super high BMIs patients. Here are the costs of duodenal switch around the world in countries that perform the surgery. 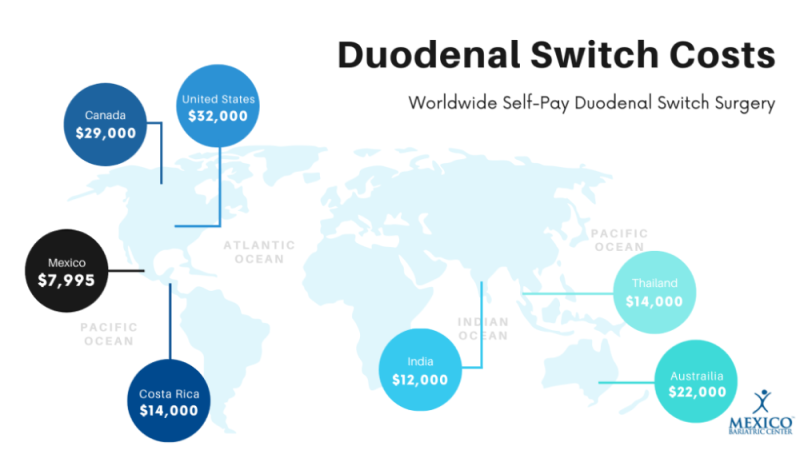 All of our cost-effective weight loss packages include just about everything you need except airfare. Our all-inclusive package includes the following;

Remember that a lifetime regimen of vitamins and supplements is critical to take daily and costs approximately $100 per month following surgery. However, these costs are frequently offset by the personal cost of obesity. Individuals undergoing a duodenal switch commonly have a lower overall prescription, medication, and food costs.

Additional benefits of duodenal switch surgery are reducing the symptoms and damage related to obesity-related diseases such as diabetes and hypertension. Severely obese individuals frequently struggle with these chronic illnesses. 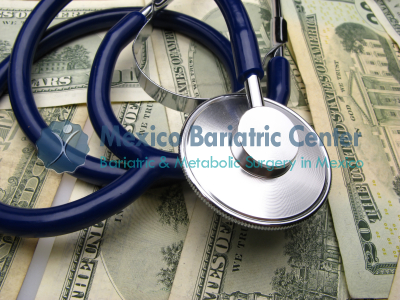 Is Duodenal Switch Covered by Insurance?

Duodenal switch surgery is a surgical intervention for morbid obesity that offers treatment that often cannot be obtained by other means. It is for this reason that numerous health insurance companies may cover the procedure costs if a candidate meets the nationally accepted criteria.

The average cost of a duodenal switch procedure can range from $20,000 to $35,000 in the United States. Before undergoing the procedure, it is highly recommended to consult with your insurance provider to determine coverage for the procedure.

Following a consultation with a bariatric surgeon near you, the doctor will commonly prepare a “Letter of Necessity” for the candidate’s insurance company. This document outlines the necessity for medical intervention. The insurance company will make a determination of eligibility based on this information. This process is called pre-certification or pre-authorization. The time frame involved in this process varies widely among insurance companies. Confirmation of a pre-authorization clears the way to proceed with the surgery.

Medical financing options are also an alternative for patients that want to take advantage of price breaks available in locations such as Mexico.

About Duodenal Switch and How it Works

The Duodenal Switch is also sometimes known as Bilio-Pancreatic Diversion with Duodenal Switch (BPD/DS) and its modified version SADI/S. The duodenal switch procedure involves the removal of a portion of the stomach, and the left “sleeve”-like stomach is attached to the final section of the small intestine. Patients can anticipate 60 to 80 percent total weight loss following this duodenal switch surgery. 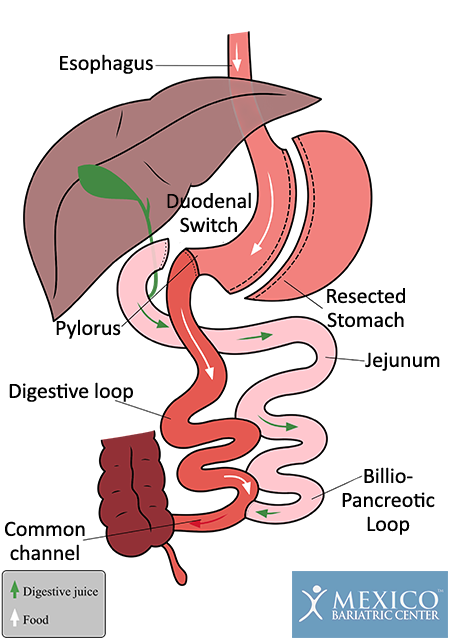 The BPD/DS and the SADi-S are advanced procedures that require specialized training, education, and skills, making it only available by a select few surgeons around the world. Both procedures are a cross between the popular gastric sleeve and a gastric bypass – utilizing a combination of two weight loss mechanisms, restriction and malabsorption.

Restriction is achieved by cutting 70% of the stomach, which reduces hunger hormone levels known as Ghrelin. The malabsorption mechanism is achieved by “switching” the gastrointestinal tract, reducing the amount of food absorbed into the body.

The post-op diet is more strict because of the strict malabsorption component. Patients can expect very little food to be digested because of the significant portion of the intestinal bypass.

Nicola Scorpinaro, an Italian physician, is credited with founding the Biliopancreatic Diversion procedure more than forty years ago. Dr. Douglass Hess perfected the method in 1989 to reduce many of the DS complications associated with the version created by Scopinaro. It was in 2006 that duodenal switch surgery gained approval to be performed within the United States.