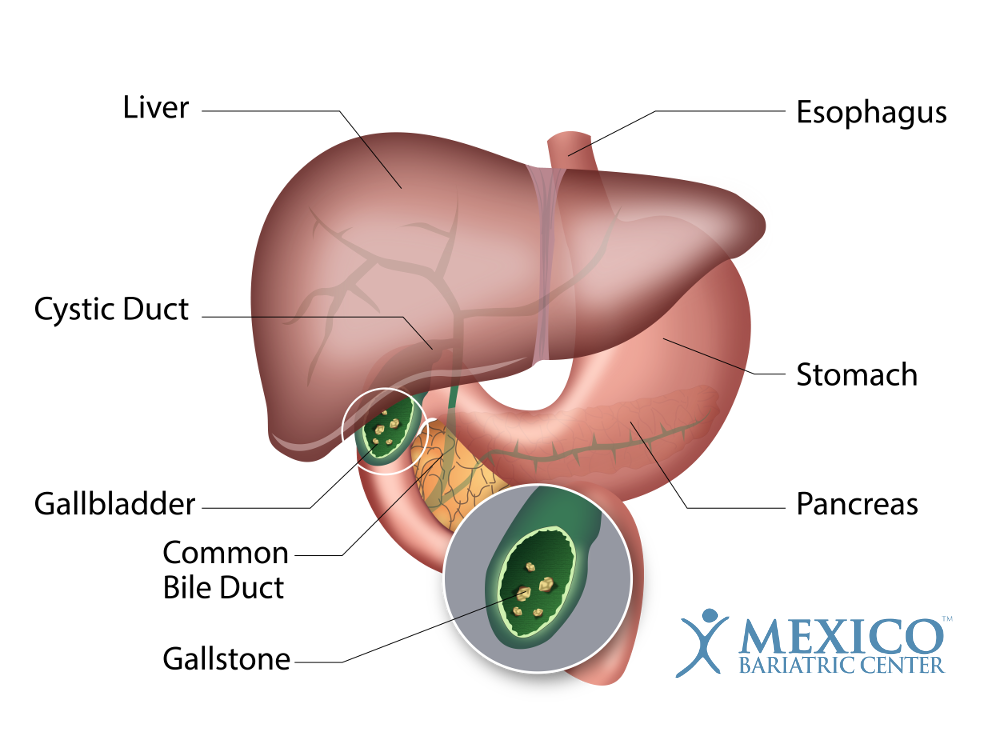 Gallbladder symptoms are extremely common in obese and overweight individuals. These problems within the gallbladder are called Gallstones, which are caused primarily by:

The liver creates bile, which helps the digestion of fatty acids. Unfortunately, if cholesterol gets too high, bile is unable to process correctly which causes a blockage creating gallbladder problems known as gallstones.

Bariatric surgery, or weight loss surgery, is a procedure that makes it possible to eliminate excess weight by making modifications to your digestive tract. Rapid weight loss (3 to 5 lbs per week) can cause gallbladder disease in post-bariatric patients.

Why Do Gallstones Form? 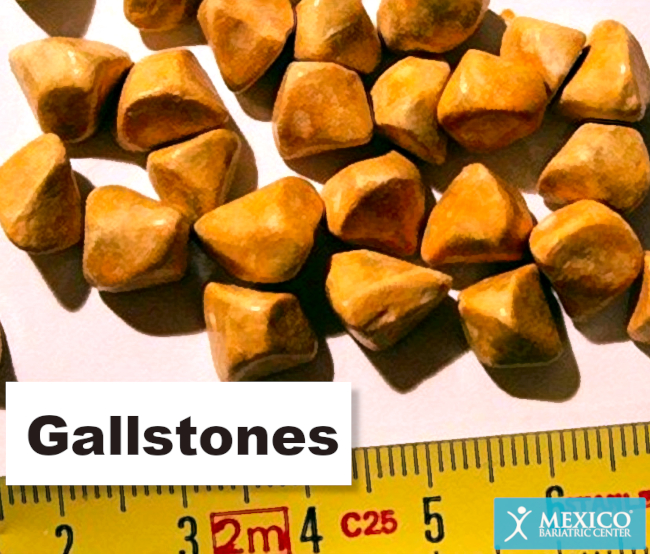 In case of abdominal pain complaints, the following tests are performed to diagnosis the presence of gallbladder disease.

Gallstones are common and affect at least 1/4 of obese individuals. This is because of the extremely high cholesterol and fat levels. In many cases, gallstones become so bad that they need to be surgically removed.

Bariatric surgery is so effective because it changes or at least disrupts the digestion process so that food is not broken down and absorbed as originally intended. A decline in the number of calories and nutrients consumed enables individuals to shed weight and lessen their risk of obesity-related health dangers or disorders.

This fat loss and rapid weight loss are risk factors for developing gallstones. There is also a heightened risk for gallstones in case you have a diet high in processed carbohydrates, calories, and fiber.

The primary potential mechanism is the low cholecystokinin secretion because of reduced neighborhood enteric-endocrine reflex leading to duodenal exclusion. Prophylactic cholecystectomy through the Roux-en-Y gastric bypass surgery was indicated to decrease the prevalence of gallstone-related complications.

The risk of gallstone formation following gastric bypass surgery is as large as 50% within the first year after the operation.

Gastric bypass uses a malabsorptive component, which gives bypass a greater chance of gallstones occurring. Purely restrictive processes like sleeve gastrectomy can lead to less gallstone formation since complete gastrointestinal movement, and entero-endocrine reflex has been preserved. To our knowledge, no reports from the literature have examined the prevalence of gallstone formation comparing gastric sleeve surgery to gastric bypass surgery. 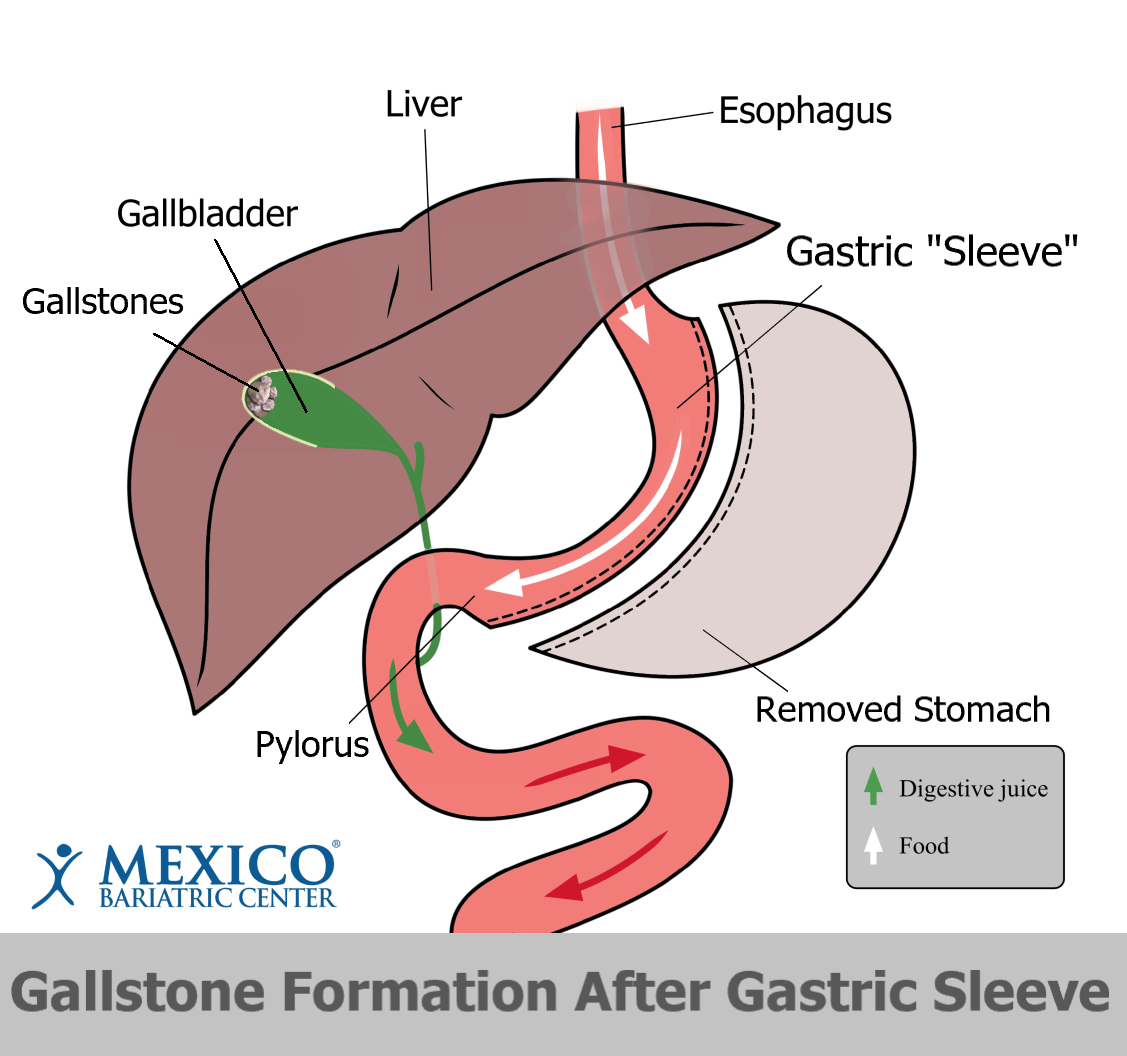 According to the other research, a greater prevalence of gallstones has been reported in gastric sleeve surgery patients compared to the overall obese population.

However, the present theories posit the operative dissection of the vagal back influences rectal contractility and a non-physiological reshaping of their gastrointestinal tract; for example, duodenal exception contributes to enhanced gallstone formation. The current study assessed the prevalence of gallstone formation following gastrectomy for stomach cancer and identified it as a risk factor for gallstones.

In gastric sleeve surgical procedures, the surgeon removes almost 80 to 85 percent of your stomach, leaving just an elongated-shaped sac that is closed with staples. This kind of bariatric process is also known as Vertical Sleeve Gastrectomy (VSG). Unlike sleeve gastrectomy, other bariatric surgeries additionally alter your gut, the principal organ of the body absorbs nutrients and calories from foods and drinks.

Lap Band, or gastric banding, has a reduced chance of gallbladder issues or gallstones compared to more aggressive weight loss procedures. This is primarily due to the less efficacy of the procedure because it causes less weight loss at a much slower pace in comparison with gastric sleeve or bypass.

The gallbladder may be removed via an abdominal incision. Nowadays, it is more probable your physician will choose the laparoscopic surgical procedure. This process involves a couple of tiny incisions. Your hospital stay and complete recovery period will probably be substantially shorter following a laparoscopic operation.

How to Prevent Gallstones After Weight Loss Surgery

The increased efficiency from weight loss surgery (like gastric bypass, gastric sleeve, or duodenal switch) appears to be the impact that the surgery has on gastric hormones which affect numerous factors such as appetite, satiety, and blood glucose management.

Can Gallstones Cause Weight Gain

Obesity is one of the most common causes of gallstones – not the other way around. Gallstones do not generally cause weight gain. They are primarily caused by being overweight or losing weight rapidly.

Consult with your bariatric doctor near you if you think you may have gallstones.