Weight loss surgery is a viable option for overweight, obese or morbidly obese people unable to lose weight through diet and exercise. Bariatric surgery is performed more frequently than ever before among this population of individuals.

A weight loss surgery such as gastric banding is considered major operation and is associated with small, but serious risks and possible complications. Adjustable Gastric Banding failure can range from Band Slippage, Band Intolerance, to Band Erosion and Pouch Dilation.

It’s important to talk with your doctors about any questions or concerns you may have regarding lap band possible difficulties before surgery. Surgeons working with Mexico Bariatric Center® do not recommend Lap-Band and only perform this procedure to rescue failed and unsuccessful surgeries as RNY bypass revision. 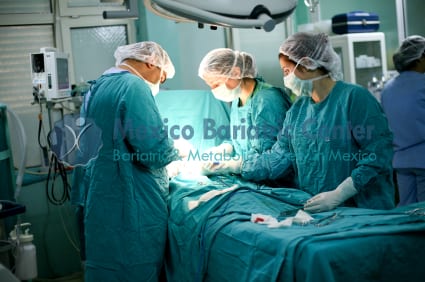 Some of the most common risks or complications related to gastric banding include the following: 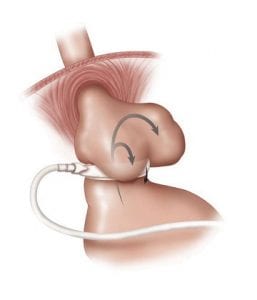 One of the biggest risks associated with gastric banding is band slippage. Often this slippage occurs when a portion of the stomach slips through the band that is placed during this weight loss surgical procedure. Some patients may not notice any symptoms when this complication occurs while others may experience heartburn, acid reflux symptoms or significant pain. This complication is remedied by removing fluid from the lap band or through the use of surgical repositioning. This can lead to a second operation.

A leak in the gastric banding system usually results in the feeling of decreased restriction and increased hunger even though the bariatric health professional hasn’t emptied the port. Surgery is commonly used to repair this complication. 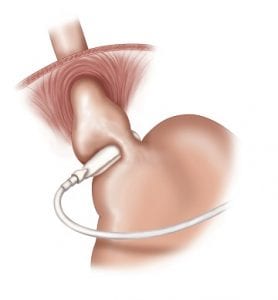 According to the University of Southern California, band erosion results when the gastric banding system created during surgery grows into the stomach itself. This condition is sometimes referred to as band migration. Permanent removal of the system is required to alleviate this complication. The band can be removed laparoscopically by a Mexico experienced bariatric surgeon. In some severe occasions, the band needs to be removed endoscopically.

Some patients are unable to tolerate the placement of a lap band system. Frequent vomiting, gastric reflux issues, and discomfort despite multiple attempts to adjust the fluid levels within the port are an indication that a patient may be unable to tolerate this foreign object within their body. In this situation, the band will likely need to be surgically removed. Patients may want to consider alternative bariatric surgery options such as gastric bypass or gastric sleeve procedures.

Infection is a possible complication of most invasive surgeries, and gastric banding is no exception. The good news is that if an infection of the port or banding system occurs, antibiotic treatment is frequently effective. There is also the possibility that the system could have to be surgically removed.

This complication results when the lap band port flips over or migrates. This condition may occur if the locking mechanism does not engage properly during surgery or if the sutures aren’t secure enough to hold the port into place. The port can typically be easily repaired with a simple procedure performed under general anesthetic.

This type of a hernia occurs when a protrusion of the upper part of the stomach results due to a tear or weakness in the diaphragm. This condition is sometimes referred to as a hiatal hernia. Many obese patients may already have a pre-existing hiatus hernia before bariatric surgery though it can also occur after a band has been placed. Many surgeons will repair a hernia during the time of bariatric procedure if it is pre-existing. 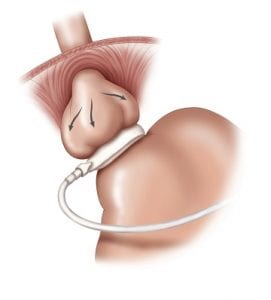 This complication refers to the small stomach pouch that exists above the band. Over time, this pouch can stretch, which can lead to vomiting, acid reflux, and reduced food volume because the pouch becomes enlarged. Removing fluid from the band may relieve this problem. If this intervention is not useful, repositioning of the band may be required.

This possible complication can be life-threatening but is, fortunate, rare. Obese individuals do have an increased risk of developing blood clots when undergoing any surgery. A family history and the habit of smoking are additional risk factors related to the development of blood clots. A pulmonary embolism is a blood clot that travels to the lungs and blocks the main artery of this essential organ or one its branches.

A bowel perforation can occur during surgery. A hole in the bowel can allow its contents to empty into the abdominal cavity. This can result in a systemic blood infection known as sepsis. Fortunately, the incidence of this complication is rare and perforations are frequently noted immediately so repair can be performed.

Conclusion – Individuals over the age of 60 are at a higher chance of developing complexities related to a LapBand procedure. Locating a reputable and experienced surgeon in Tijuana, Mexico is one of the best ways to reduce the risks associated with this bariatric surgery. Many of the problems associated with gastric banding are easily repaired. View the complications of gastric sleeve, duodenal switch, and gastric bypass.

One of the most dangerous complications to look for is a stomach obstruction. The over-inflated band can cause this, stomach or band slippage, improper placement of the band, food, swelling or stomach pouch enlargement or twisting. Esophagus stretching or dilation can also occur in some patients. This can be caused by binge eating, excessive vomiting, stoma obstruction, tight band or improper placement of the band.

Mexico Bariatric Center has essentially stopped doing this procedure and is revising lap bands on a regular basis. If you have lap-band and have not reached your desired weight loss, it’s in your best interest to remove and revise the lap-band to another operation such gastric sleeve.