After you determine your candidacy for bariatric surgery, the bariatric surgeon will recommend weight loss procedure options that best suits you based on your health, BMI, and devotion to the procedure. Here we will be explaining each procedure in detail and its pros and cons for you to see which weight loss surgery option fits you best. Remember each procedure makes biological differences in anatomy that affects the body impacts your lifestyle.

Roux-en-Y Gastric Bypass (RYGB) is often compared to the newer procedure Duodenal Switch w/ BilioPancreatic Diversion (DS/BPD). Both are very similar in method of weight loss, but both have slight differences that make each surgery ideal for particular individuals. Duodenal switch is a newer procedure than Gastric Bypass and is reserved for morbidly obese patients (BMI>50) or patients who want to be really skinny.

Which Procedure is Best For You?

Gastric bypass surgery has a lot more long-term data and results than its newer counterpart, duodenal switch surgery. The patient needs to weigh out the risks and rewards of each surgery. The duodenal switch has more expected weight loss than gastric bypass surgery, although it also has many more potential complications than RNY. The RNY bypass has been known as the gold standard of bariatric surgery and has been around since 1967. 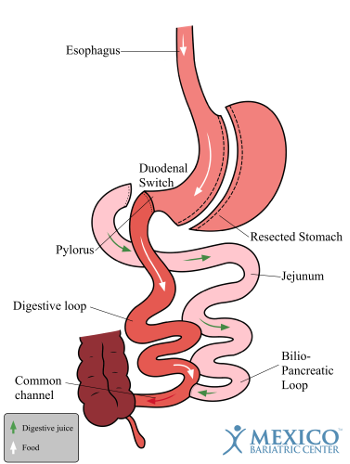 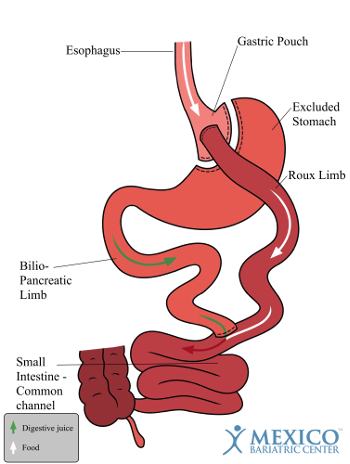 Gastric Bypass Surgery, otherwise known as laparoscopic Roux-en-Y Gastric Bypass, is the gold standard in bariatric surgery with good reason. Ever since 1994, gastric bypass has been performed and perfected, allowing researchers to study the long-term results. This allows patients the peace of mind to choose a well-established weight loss surgery.

In the duodenal switch, the stomach size is reduced and the pyloric valve, or pylorus, stays untouched. The more restrictive stomach may result in increased gastric pressure by reduction in gastric emptying and decrease in volume. In gastric bypass surgery, however, the pyloric valve stays in the separated stomach and is completely bypassed. This means the pylorus does not have the ability to regulate food as it goes from the stomach to the small bowels. The new pouch that is created in gastric bypass surgery redirects almost all of the stomach acid to stay out of the esophagus. Therefore, the Roux-en-Y gastric bypass is best for patients with severe acid reflux and/or gastroesophageal reflux disease (GERD).

It is estimated that over 50% of bypass patients experience dumping syndrome at one point or another. Staying on the post-op diet and keeping in touch with your nutritionist usually fixes this problem. Often times, RNY patients outgrow the symptoms.

If the patient has had or currently has ulcers, the duodenal switch is recommended over gastric bypass surgery. The pouch that is formed with bypass surgery is so small, it is referred to as the “blind” stomach. It is nearly impossible for ulcers to be detected without a doctor laparoscopically scoping the stomach under anesthesia. The surgeon generally uses one of the incisions that was used during the gastric bypass procedure.

Both procedures cure comorbidities like Types II Diabetes and hypertension, however, duodenal switch surgery is much more effective with remission of obesity-related diseases. Duodenal switch procedure also shows a much quicker result in its metabolic effect.

Gastric Bypass Surgery costs range from $5,995 to $19,000 depending on where the surgery takes place. In Mexico, the cost of gastric bypass surgery is as low as $5,995 and still is a high-quality procedure. In the United States without insurance, RNY ranges from $15,000 to $30,000 for patients.

The criteria for bariatric surgery insurance coverage follows strict guidelines for patients who get accepted. The process takes on average one year just to be officially approved by the insurance company to get weight loss surgery. Patients must follow the pre-op diet while meeting medical professionals including psychologists and nutritionist before approval.

There are much fewer complications associated with gastric bypass vs duodenal switch surgery. The risks and complications include excessive/internal bleeding, infection, blood clots, dumping syndrome, malnutrition, and ulcers.

As a newer bariatric procedure, the DS has a variety of complications that occur more often due to less experienced surgeons. The duodenal switch complications include nutrition deficiency, leakage, infection, hemorrhaging, blood clots, and protein malabsorption. 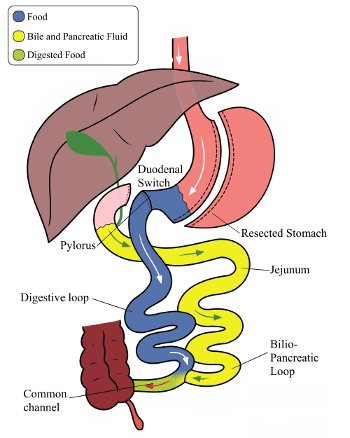 The new digestive tract after duodenal switch surgery is also changed through both restriction (by resecting about 70% of the stomach similar to gastric sleeve) and malabsorption (bypassing a large portion of the small intestine). A larger portion of the small intestines is bypassed, or switched, which causes the DS patient to need more vitamins and supplements for their lifetime. The anatomy is more intact, although less protein and fat is absorbed causing more nutritional deficiencies. 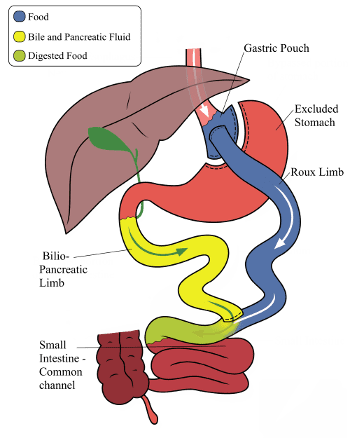 The digestive tract after gastric bypass surgery is changed through both restriction and malabsorption. First, the stomach is formed into a small pouch called the stoma. This tiny pouch doesn’t regulate the flow of food into the small intestines, causing patients to need vitamins to help digest the food thoroughly. The pouch can also be stretched because of little regulation. Fewer vitamins are needed than duodenal switch surgery because less of the small intestines are bypassed.