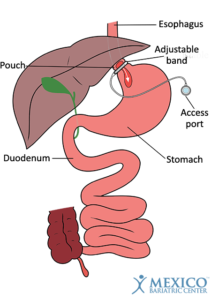 Adjustable Gastric Banding (AGB) used to be one of the most common weight loss procedures. This procedure requires the use of an implant. In the United States, only two implants are FDA approved: REALIZE Band and Lap-Band System.

Both procedures are done laparoscopically as well as with single-incision through the belly button with little scaring. Both LAP BAND and REALIZE BAND have a proven track record for patients who are able to follow the postoperative diet guidelines and learn to do portion control.

Differences Between Lap-Band vs Realize Band?

There are very slight differences between Lap-Band to REALIZE. Both accomplish the same goal and functions in very similar ways. Most surgeons say that the differences are subtle, and the use of one or another is based on the surgeon’s preference.

Lap-Band system is an implant from Allergan Corporation. The Lap-Band is the first AGB device approved by FDA in the United State for weight loss procedure. For patients who are in the United States. The Lap-Band is comparable in expected weight loss to the Realize Band. Allergan claims that their gastric band exerts equal pressure on all sides of the esophagus and stomach and as a result, it reduces the chance of erosion. The Lap-Band is offered in two different sizes. Lap-Band system is one of the most popular procedures and is widely known in the media.

REALIZE Band, is an implant from the Ethicon Endo-Surgery, part of Johnson & Johnson Company. The Realize Band is the second AGB device approved by FDA in the United State for weight loss procedure in 2007. However, the REALIZE band was approved in Europe long before and has a track record of success.

The REALIZE Band has been implanted in over 100,000 patients. The Realize Band offers a comprehensive aftercare program (at REALIZE mySuccess) designed to help patients reach their weight loss goals. J & J claims that their gastric band has a low-pressure system that supports wider fill ranges and as a result. Understand the complications and risks associated to lap band erosion. The Realize Band is offered in one size that fits all.