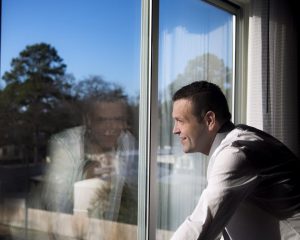 “Truly seeing myself for the first time in my life”

“I was miserable with myself. I was in a plummeting shame spiral. I was disgusted with my weight and kept telling myself that all I had to do was work out and start dieting. It was always “tomorrow” that I would start though. Then I would get more disgusted and ashamed of myself for not being able to start dieting or working out. It just kept getting worse and worse. I have been successful losing weight in the past and had dropped from 250 (the largest I had been at the time) down to 210 in 2008 only to put all of it back on plus some by 2015. I was 320 pounds when I decided I had to do something different.” – James

James, when faced with various health issues and risks from his obese state, decided to come to Mexico Bariatric Center. Before undergoing bariatric surgery in May of 2015 with Dr. Ponce, James weighed 315 pounds.  Now, James has lost an incredible amount of weight, boosting his confidence, his energy, and capabilities. As of June, 2016, James is down 145 pounds, with no real complications.

“I did have some gall bladder pain the first 4-6 months but that was just from all the far my body was processing out of my system.” – James

The surgery, along with good lifestyle choices have helped him to not only lose the weight, but to maintain his results.

“It has. I dropped to 190 by January and stayed there until April when I started working out regularly. I have since dropped to 175 and maintain it fairly easily. I have about 10 pounds of extra skin I am looking at having removed, which would put me around 165. My current body fat is 8% though” – James

James Heritage, Mini Gastric Bypass Before and After Photos 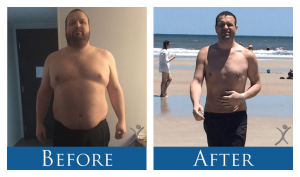 “Everyone has commented that I’m a completely different person now. My self confidence has soared. I interact with people completely differently. All of my friends and family always said that “I didn’t need to lose weight” but the change has been drastic and, everyone agrees, very much for the better. I was scheduled for the duodenal switch but when Dr. Ponce went in, my bile duct was too close to my pyloric valve (millimeters away), preventing the duodenal switch from being performed. He made a professional decision to perform the mini gastric bypass (or the omega loop as it is referred to commonly in the states) instead of the duodenal switch. I have been completely happy with his decision.” – James

“I originally went with the DS (Duodenal Switch) over the mini bypass because it still allowed for malabsorption but not as much. I was concerned the mini bypass would allow for too much malabsorption and cause nutrition deficiencies later. I haven’t noticed anything, however. There are days I am more tired than others, but those are also the days that I realize I have eaten less than others…….So, I get some calories in me and everything is good” – James

” I have always been fairly well educated on exercise and nutrition but have rarely implemented it. My typical day consisted of breakfast at McDonald’s or chick-fil-a (around 1200 calories), a large combo meal for lunch (2000 calories), a large combo meal for dinner (2000 calories), and then I would snack at night (another 500-1000 calories) for a total of 5000-6000 calories a day. I would tell myself I was going to work out and have actually had a gym membership faithfully for the last 6 years, but by the end of the day, I would just be too exhausted to go. Or some other excuse that would prevent me from going…..Today, even the days that I think I have been completely horrible at eating, I consume no more than 1800 calories. And, as I said, those are days I start kicking myself for “falling off the wagon” until I actually sit down and count the calories, realizing that I still have a calorie deficit for the day after taking in my BMR and exercise.” – James

“I think, for most of us, there will always be a certain amount of shame still associated with eating regardless of how much weight we lose.” – James

” I have never seen a thin person in the mirror, even before the surgery and before I ballooned up to 320. When I was 210 in 2010, I still saw the 320-pound guy in the mirror. I have always seen that man, even as a child. It wasn’t until I started losing weight post surgery that I began to love myself and truly see myself. That happened at 280 pounds, 250 pounds, 225 pounds, 200 pounds! All of those were sizes I had been before and still hated, but when I hit them this time, I was ecstatic and didn’t see a “fat” person anymore. It took hitting rock bottom for me to get my self-image in balance and healthy.” – James

“They were great. There was never a time that I felt unsafe or in any danger whatsoever. There was a small language barrier that was easily overcome with a little perseverance and hand gestures. I have since sent my mom and cousin for weight loss surgery and went back in December to have a fat transfer done on my bottom (since I lost it all by losing weight!) and am currently planning on going back this summer to have the extra skin removed. MBC has been wonderful, most notably Karla, Flora, Leo, and Sergio!” – James