Obesity Statistics United States and Across the Globe

Obesity is one of the leading causes of preventable death and is underestimated by public globally.

In latest research (Forbes – December 2015), the people of countries around the world were asked: Out of every 100 people how many do you think are overweight or obese?

Findings show that in most countries the public is underestimating the extent of obesity. India, Japan, and China were the only exceptions as they overestimated the obesity rate in their countries. 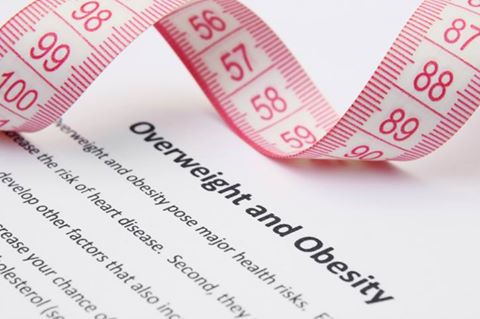 Definition: Obesity, by definition, is a body having too much body fat. It’s a multi-factorial issue facing millions in the United States and Canada.

Overweight vs. Obese: Overweight is typically defined by BMI (body mass index) of 25 to 29.9 while obesity is over 30. Both are increasing at alarming rates, and both cause a challenge for most United States families.

How it Occurs: Obesity occurs over time, by eating more calories than you bodies expand.

Factors of Obesity: There is a multitude of factors that go into obesity including, activity level, diet, genetics, body composition, exercise, environmental hormones, age, smoking, certain medications, and pregnancy.

Trend: Obesity is Increasing year after year, and the outlook is alarming.

Obesity: One of the Top Health Conditions Affecting the United States 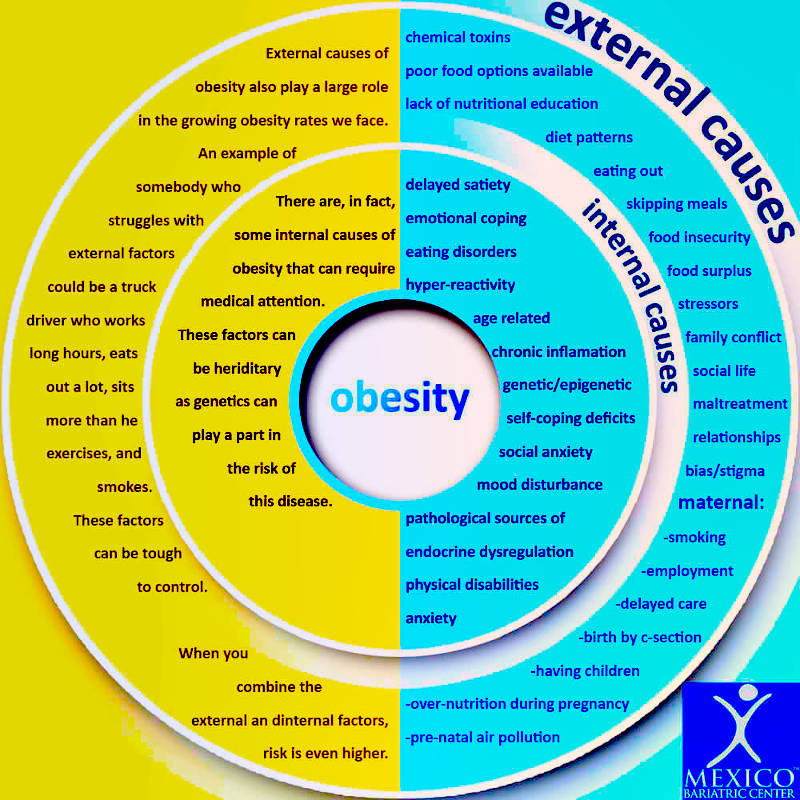 Not only does obesity limit agility and fundamental human abilities, it often leads to other medical conditions such as diabetes, high blood pressure, certain cancers, and even death. Due to the number of people affected by this disease, obesity is an epidemic not just in the United States, but the world.

Combining these studies reveals patterns strung among the data while introducing helpful information for initiating weight loss. Stay in tuned below the infographic to see more about the various obesity treatment options. 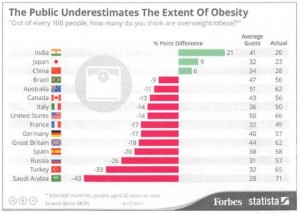 Once leading the way in obesity rates, in both absolute and relative terms, United States (as of 2015) is no longer the fattest country in the world and is positioned second with 66% rate.

This could be due to recent year efforts in combating obesity in the U.S., especially a decline in obesity rates among children. Another striking finding of this research is the Saudi Arabia’s rate of overweight/obesity at 71%. As a matter of fact, Saudi’s obesity has become one of the country’s major concerns.

Of the leading 22 industrialized countries, the U.S. still has one of the highest obesity statistics and Canada is at 10th position as of 2015 with 56% obesity rate.

2013 Statistics for the United States, Canada, and Worldwide: 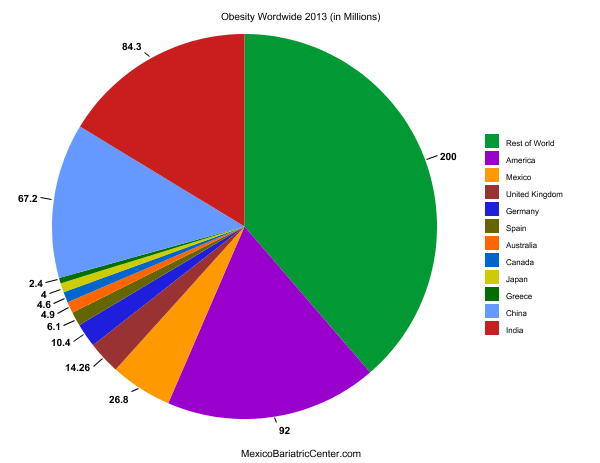 Adult Obesity in the United States: “Obesity rates for children and teenagers ages 10 to 17 ranged from a low of 9.9% in Oregon to a high of 21.7% in Mississippi according to the most recent state-by-state level data from the 2011 National Survey of Children’s Health (NSCH).”

Study of Children Ages 10 to 17: “According to the most recent data, rates of obesity now exceed 35 percent in three states (Arkansas, West Virginia, and Mississippi), 22 states have rates above 30%, 45 states are above 25%, and every state is above 20%.”

Food Insecurity, Food Deserts, and Healthy Weight: “More than 14% of U.S. households (17.4 million) are “food insecure” — defined by U.S. Department of Agriculture (USDA) as having their access to adequate diet and nutrition limited due to cost, proximity and other resources.”

Physical Inactivity in the United States: “Being physically inactive is responsible for one in 10 deaths among U.S. adults. 80% of American adults do not meet the government’s physical activity recommendations for aerobic and muscle-strengthening. Sixty percent of adults are not sufficiently active to achieve health benefits.”

Hypertension in the United States: “One in three adults has high blood pressure, a leading cause of stroke. Approximately 30% of cases of hypertension may be attributable to obesity, and the figure may be as high as 60% in men under age 45.”

Racial and Ethnic Disparities in Obesity: “Rates of overweight and obesity have increased across the United States among people of all ethnic and racial groups, all ages, and both genders… Among U.S. adults, Black and Latino’s populations have substantially higher rates of obesity than do White communities. This is true for both [genders].”

State obesity rates could skyrocket by 2030: “Obesity is one of the biggest drivers of preventable chronic diseases and health care costs in the United States. Currently, estimates of these costs range from $147 billion to nearly $210 billion per year.”

South Africa has been said to be the fattest sub-Saharan nation in studies over the past years since 2011. It has been claimed that 70% of women in South Africa are overweight with 42% being obese. The number of men who are overweight to obese falls shorter at 40%. Of the total population, it was found that 61% are overweight or obese.

There is no significant correlation between obesity prevalence and education among men. However, among women, those with college degrees are less likely to be obese compared with less educated ones. 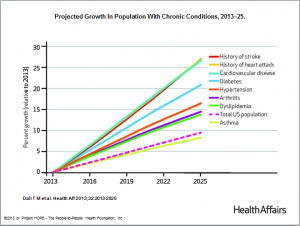 Chronic diseases caused by obesity is on the rise. The American Heart Association (AHA), predicts that by 2030 total medical care costs could reach $861 to $957 billion. A Recent study shows much steeper growth of some chronic diseases than the population growth. The annual medical costs associated with obesity in the United States range from $147 billion to nearly $210 billion per year. Moreover, each obese worker costs its employer approximately $500 per year.

Obesity has severe long-term economic and social costs with implications on a personal health, including cholesterol, blood pressure, heart disease, type 2 diabetes, stroke and heart attacks, and more. Body image is tied to our sense-of-self and self-image. A positive self-image is essential to confidence, success and a sense of worthiness.

Bariatric surgery has been clinically shown to help individuals lose necessary weight to ensure a healthy body. Although bariatric surgeries vary in method and results, most individuals can expect to rid themselves of obesity within one to two years. One of the benefits of bariatric surgery is the reduction or total remission in type 2 diabetes roughly 85% of people with diabetes are type 2 and of these, 90% are obese or overweight.

How to Rid Yourself of Obesity (Reduce Obesity)

Weekly Physical Activity: Typically individuals who are overweight or obese need to get a culmination of at least 150 minutes of moderate to intense physical activity to prevent weight gain. Those who are looking to lose specifically more than a modest amount of weight should work their way up to an aggregate of 300 minutes.

Small Steps Matter: Sometimes you just can’t visit the gym, that’s okay because every day we’re faced with choices. Whether to climb the stairs or take the escalator. Whether to walk to the corner market or get your care. Whether to order, or cook something healthy delicious. You get the picture, but every small step matter.

Behavior Changes: Behavior can be a huge factor in creating unwanted extra pounds. Those late-night fast food runs are only increasing your waistline.

Support Groups: Support groups can help you stave off emotional eating. Today there are numerous groups and forums, which can assist you with your emotional issues.

Bariatric Surgery is an option for individuals who have failed with typical diet and exercise. There are several weight loss surgeries, but they tend to fall into two categories: restrictive and malabsorptive. Like weight-loss medication, bariatric surgery will only work if individuals are dedicated to new diets and physical activities, as well, as the new behavior changes needed.

Imagine giving a child a burger… but before you provide them with the burger, you preface this by saying it’s ‘Good For You,’ or, in other words, healthy. Watch, as his the child’s expression slowly distorts towards grimace. Give a child a burger that is, ‘Delicious,’ and it’s assumed it’s fatty or unhealthy. But, the main thing is that it tastes good.

Children can be swapped with most adults in this scenario. The fact is most obesity can be attributed to an incremental theory, which says that all those extra calories, say an average of 200 calories a day, contribute to your waistline. Saving yourself from ingesting 100 calories per day, can lead to big changes. Every bit helps.

Labeling foods healthy or not, regardless of how they taste the wrong answer. Giving people what they want is the answer. Delicious Food. A child doesn’t need to know how healthy things are. Their minds should be more consumed with otherworldly endeavors, like learning.

The above statements provide only a general description of morbid. The exact degree of excess weight is determined using the Body Mass Index (BMI), which employs both weight and height to calculate the measurement.