Read This Before You Decide to Try AspireAssist

What is the Aspire Assist?

Aspire Assist is a very different type of technology. It is the first and only device that, rather than reduce hunger or prevent overeating, allows the individual to eat almost as much food as they want with few to no food restrictions. But how does it work and, perhaps more importantly, is it better than other bariatric surgery procedures?

How Does it Work?

In this story, put together by ABC News and posted on their YouTube Channel, they share just what AspireAssist is and how it works. You can see by the comments and the high number of dislikes that it is not a popular choice. 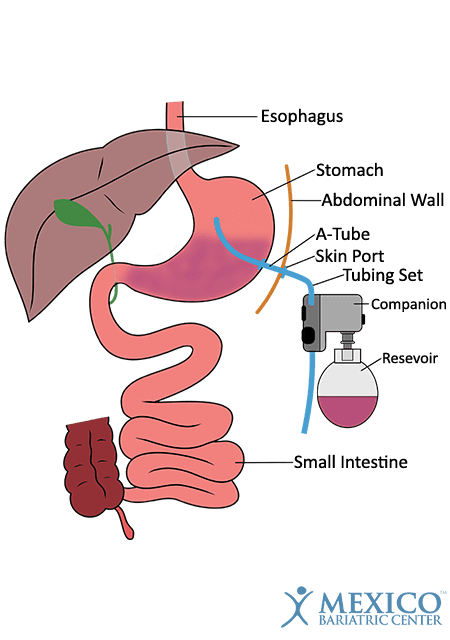 The AspireAssist is a device that is connected to your stomach directly and acts like a “Food Hoover.” After eating, the device can be used suck the food out of the stomach like a vacuum, and dump the food into a receptacle (usually a toilet) so that it can be flushed like food waste.

It has been nicknamed “stomach sucker,” because of the way it empties the stomach, almost like regurgitating food. It uses a valve mechanism that sucks the digesting food out of the stomach and directly into the toilet.

The procedure may not be considered surgery at all. It is minimally invasive, and the procedure is almost identical to the way that feeding tubes are inserted into the stomach. In fact, the procedure is so similar that often it is performed by gastroenterologists, not bariatric surgeons.

The entire AspireAssist procedure takes only about 15 minutes, with fast recovery time. It can also be removed with a 10 to 15-minute procedure. Complications are very rare. General Anesthesia is also not necessary. Most patients use only Twilight Anesthesia – the patient is awake but too sedated to worry about the procedure.

According to a study in Sweden, the AspireAssist does help patients lose weight when also combined with Cognitive Behavioral Therapy. Keep in mind there was no control group (it is generally recommended that all research use a control group for reference), but average weight loss was 40% excess body weight over a period of 6 months.

The procedure itself generally has few complications. Because it is related to the feeding tube procedure, it is a very well-known and safe procedure with a low mortality rate.

Yet AspireAssist is not without challenges. One such challenge is making food small enough to fit through the system. The tube is very small. Food needs to be chewed to pieces that are 5mm or smaller, which is less than the size of most normal chewed food. If food is not chewed to such a small size, it will not pass through the tube and get stuck. This is not dangerous but it can be inconvenient.

The makers of AspireAssist note that this is partially on purpose, as eating food too quickly is one of the causes of continued obesity.

Also, the long-term effects of pumping food out of your stomach are not yet known. Many refer to this type of device as “assisted bulimia,” because it purges food similar to the way that someone suffering from an eating disorder may purge the food.

Those suffering from bulimia frequently have vitamin and nutritional deficiencies, as most nutrients are processed in the intestines, not the stomach, and the food is removed before it has a chance to be processed.

“I’m sure it won’t be long until tales of infections, leakage, lack of nutrient absorption, depression and suicide, severe hypoglycemia, extreme thiamine deficiency, anemia, osteoporosis, and all sorts of other complications will surface. In many cases, these are things that are more dangerous than just being fat.”

Though not considered a complication, the willingness to frequently remove food through a tube into a toilet is also questionable. Many patients may find they do not have the time, energy, or motivation to go through the process. Many also consider it “gross,” including the CEO of Aspire Bariatrics.

It is also not clear if this type of procedure will help control obesity in the long term. Some consider it an enabling device that may teach those with obesity bad habits about eating, making them feel as though they can eat what they want and simply remove it afterward. According to one doctor: “This is mechanized bulimia. It’s a device that makes bulimia okay.”

But the early patients that have tried the machine do report success. They claim that the sheer amount of chewing necessary to use the device teaches them to slow down their eating significantly. Said one patient: “You have to chew your food beyond comprehension … I mean, you just don’t grasp how much you have to chew your food.”

“At some point, they just get tired of chewing,”; [one lead researcher] says. ” So they are feeling that full sensation with less food because they’re eating slower and they’re also literally just getting sick and tired of chewing.”

How AspireAssist Compares to Other Weight Loss Surgeries

It’s unclear whether being “tired of chewing” is a valid weight loss strategy. But early weight loss results, at 40% excess body weight, may be helpful for some obese patients that are opposed to permanent types of weight loss surgery. But how does it compare?

AspireAssist falls short of the weight loss of gastric sleeve surgery. Gastric Sleeve is known to remove 60% of excess body weight on average, compared to the 40% of AspireAssist. Gastric Sleeve is also known to reduce hunger, does not have any complications with food size or infections, and requires very few food restrictions unless you notice an increased sensitivity to certain foods after the procedure is over.

The primary advantage of AspireAssist over Gastric Sleeve is that AspireAssist is reversible. If you decide you no longer want to use AspireAssist, it can be easily removed.

Finally, it may also be cheaper if paying out of pocket in the United States, and the time of the procedure is both shorter – with only a few hours spent at the hospital.

Gastric Bypass has similar advantages and disadvantages to AspireAssist as the gastric sleeve. It is also a permanent procedure with an average of 65% EWL (Excess Weight Loss). It also reduces hunger and is known to be a safe option in the long term.

Gastric bypass does come with more side-effects, such as dumping syndrome. It also comes with more food restrictions, which means that you are more limited in your food choices than you would be with AspireAssist.

Nevertheless, the success rate and safety rate of gastric bypass are second to none, as the procedure has been frequently studied for decades, and had long been considered the premier choice for weight loss surgery before the last few years when gastric sleeve took over.

AspireAssist, which has not been around as long as either procedure, does not have a long safety rating. It also requires frequent emptying of the stomach and long chewing time, which neither gastric sleeve nor gastric bypass requires.

AspireAssist does compare somewhat favorably to Lap-Band – at least when you remove the “Gross” factor. Both procedures:

Although new to the bariatric market, research does support a few benefits of AspireAssist over Lap-Band, including:

However, Lap-Band has some advantages over AspireAssist as well, including:

AspireAssist is an interesting new technology. But it struggles with three main issues:

It will be interesting to see how the technology compares over time. But at the moment, AspireAssist is too new, too unusual, and not effective enough to be considered recommended. However, in a few years, if there is more research into the device and a standardized way of using it, it will be something that could be considered as an alternative to the Lap-Band. It is just not there yet.