Gastric Bypass Surgery, also known as Roux-en-Y (RNY) Gastric Bypass, is recognized as a “Gold Standard” in the bariatric industry. Gastric bypass is a more aggressive procedure than gastric sleeve.

The RNY bypass surgery works using two methods (or components), called Restriction and Malabsorption. These two components work together creating one of the most powerful combinations in curing obesity.

Unlike lap band and gastric balloon, RNY Bypass operation is a permanent and effective solution to lose weight as it changes body’s metabolic thermostat.  The gastric bypass is a safer option compared to  duodenal switch.

Mexico Bariatric Center® offers Mexico gastric bypass surgery with some of the most trusted, board-certified surgeons in Tijuana that can save patients up to 60%* on all-inclusive, out-the-door packages. 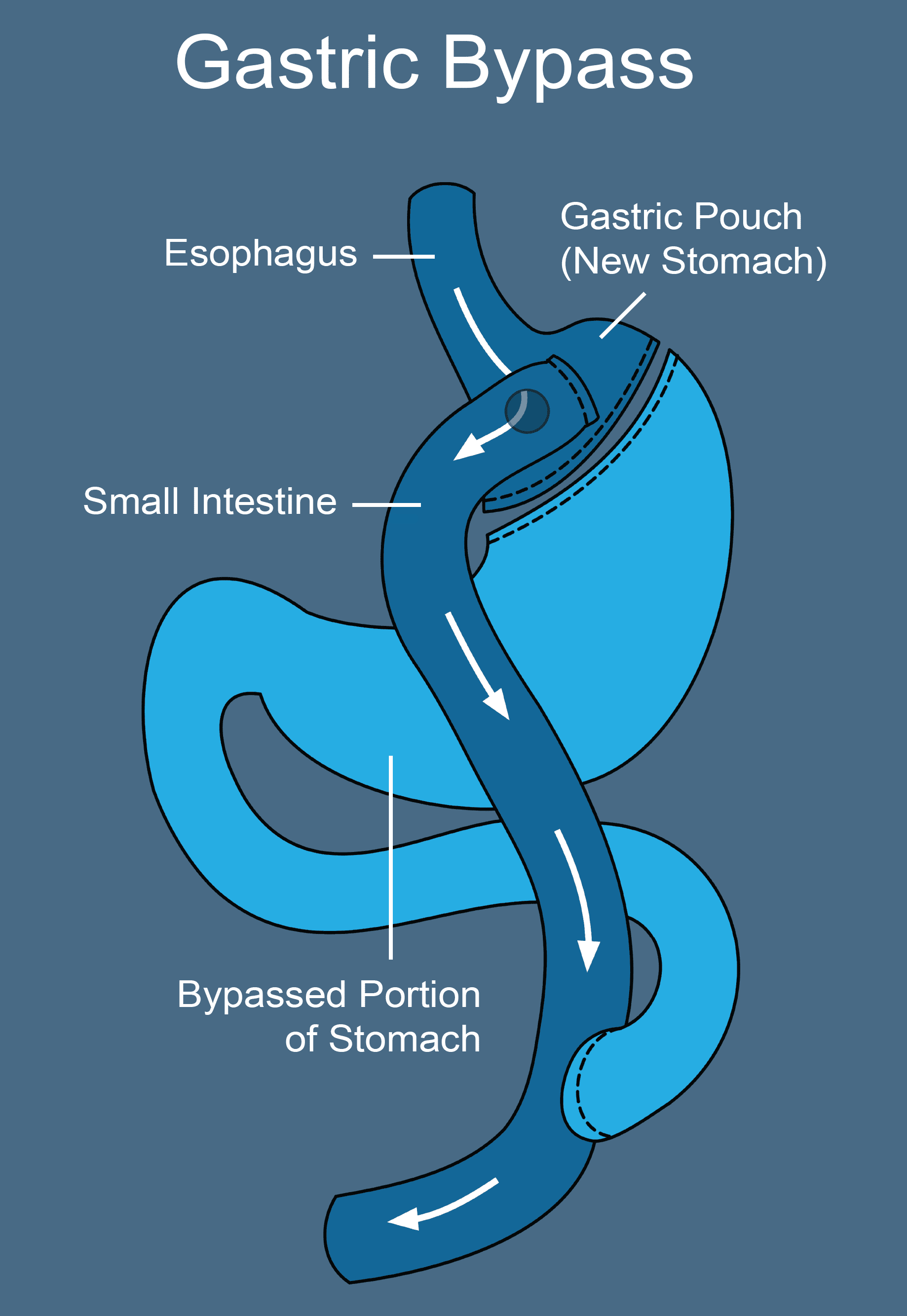 See if you Pre-Qualify

Do I Qualify for RNY Bypass in Mexico?

Use our BMI calculator to instantly determine if you’re a candidate for gastric bypass Mexico. Our general requirements for procedures:

Which Surgery is Best for Me?

Gastric bypass is better suited for patients with severe acid reflux and GERD. However, if you have ulcer problem or are taking Aspirin/Non-Steroidal Anti-Inflammatory Drugs (NSAIDs) on a regular basis, gastric sleeve or duodenal switch are better options for you. The reason for this is that there is no conventional routine to detect ulcer in the “stoma” or so-called “blind” stomach.

MBC surgeons review each patient on their own to see if they could benefit from this weight loss procedure.

How Much Weight Could I Lose with Bypass?

According to the Obesity Action, on average, by year one, bypass patients lost approximately 34 percent of their total body weight.[1]. After operation, a majority of our patients lose most of their excess weight (averaging 70-80% excess weight loss %EWL) within the first two years!

How Much Weight Will I Lose With Gastric Bypass Surgery?

Cost of Gastric Bypass in Mexico

The price of Roux-en-Y Bypass in U.S. and Canada can be quite expensive (averages around $25,000) due to the high cost of medical care and supply. Tijuana, Mexico offers one of the most affordable prices for bariatric surgery, including RNY gastric bypass.

Mexico Bariatric Center® (MBC) offers all-inclusive, affordable packages with no hidden costs – which includes everything a patient needs pre-op and post-op. Our top-rated bariatric surgeons charge 1/3 less than their U.S. and Canada counterparts with financing options for those individuals seeking payment plans and to defer payments.

Is Gastric Bypass in Tijuana Safe?

To reduce risks of gastric bypass in Mexico, MBC follows these guidelines:

Besides rapid weight loss, another major benefit of gastric bypass surgery is that it is fully capable of reversing or improving the most severe comorbidities, which include type 2 diabetes, heart disease, stroke, high blood pressure, gastroesophageal reflux disease, sleep apnea, depression, and many other obesity-related health problems.[2]

The RNY gastric bypass procedure is performed laparoscopically and it takes about 2.0 to 2.5 hours from start to end. The actual operation takes about 60 min to 90 min, depending on the surgeon’s skills and experience.

The patient is required to stay in the hospital for one to two nights, however, to ensure fewer complications, MBC keeps the bypass patients 3 nights in the hospital. Healing is fast and recovery time is different for everyone, however, in general patients can return to work after two to four weeks following the surgery.

Gastric bypass surgery (RYGB) is a safe procedure but like any other surgery, it has short-term and long-term risks and side effects. Vitamin or iron deficiency along with protein or calorie malnutrition is common with RYGB because food intake bypasses a section of the intestines. Dumping Syndrome, for example, is also common after because food gets dumped directly from stomach to small intestine without being digested.[3]

During the gastric bypass surgical procedure, the surgeon makes about 5 or 6 small incisions on the belly and inserts trocars (hollow tubes) through the incisions as a conduit for surgical instruments. The abdomen is inflated with carbon dioxide (CO2) gas for the surgeon to have room to maneuver with organs pushed aside gently.

A laparoscope (probe equipped with a built-in camera) and other surgical instruments, including a retractor to lift the liver, can now be inserted into the abdominal cavity. The cutter/stapler (normally a product of Ethicon) is used to cut the stomach and staple the stomach at the same time.

Part One: Making a Small Pouch in the Stomach

The stomach is divided up into two parts by the stapler/cutter: a much smaller upper part (pouch) about the size of a golf ball and a larger lower part (remnant pouch). The new smaller stomach holds about two ounces of food and receives food. The bottom part of the stomach (about forty ounces) no longer receive food – the gastric juices from this part pass into the intestine and mix with food. 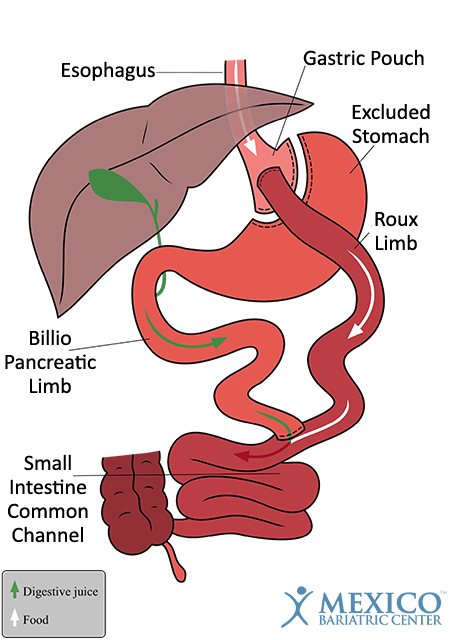 Proximal Bypass: Proximal or short-limb RNY is the standard procedure performed. The Y-connection is connected near the upper part (proximal) or first 10 centimeters of the gastrointestinal tract (small intestine).

Distal Bypass: In Distal Gastric Bypass or long-limb RNY, the Y-connection is connected further down the track about 100-cm (distal), allowing fewer nutrients to be absorbed. This increases the weight loss for the patient.

Gastric Bypass Revision Surgery in Mexico: Patients who have already undergone gastric bypass surgery can choose a revision or another bariatric surgery. This can arise because of many different issues, including lack of sufficient weight loss. MBC surgeons are also experienced in revision of previous gastric bypass by open incision surgery. Learn more about gastric bypass revision in Mexico.

* Prices are subject to change. Not valid on blackout dates. Prices depend on the surgeon, surgery, additional fees, and schedule. Prices may rise because of BMI level and previous abdominal surgeries.

** All of the testimonials are covered in our disclaimers. Individuals results may vary. There is no guarantee made by statements on this website.