Cardiovascular disease (CVD) has the highest mortality rate around the globe. Ectopic fat storage surrounding the heart is thought to play a major role in the pathogenesis of Coronary artery disease (CAD).

The development of obesity not only increases fat stored in adipose tissues but also causes lipid deposits (ectopic fat) in and around other organs, like the heart.

According to recent study findings, patients who lost weight after bariatric surgery experienced a decrease in their pericardial fat depots. The morbidly obese undergoing bariatric and metabolic operation would have at least a 50% less chance of cardiac events.

Having too much adipose tissue (AT) has always been a risk factor related to cardiovascular disease. This adipose tissue is the fat used to store energy which makes up 20-25% of the total body weight of a normal person.[1]

Fat Around the Heart

Fat deposits around the heart are a proponent risk related to increased cardiovascular problems. These layers of fat can be separated into 6 different components, and each offers different risks of heart-related side effects relative to obesity and morbid obesity. 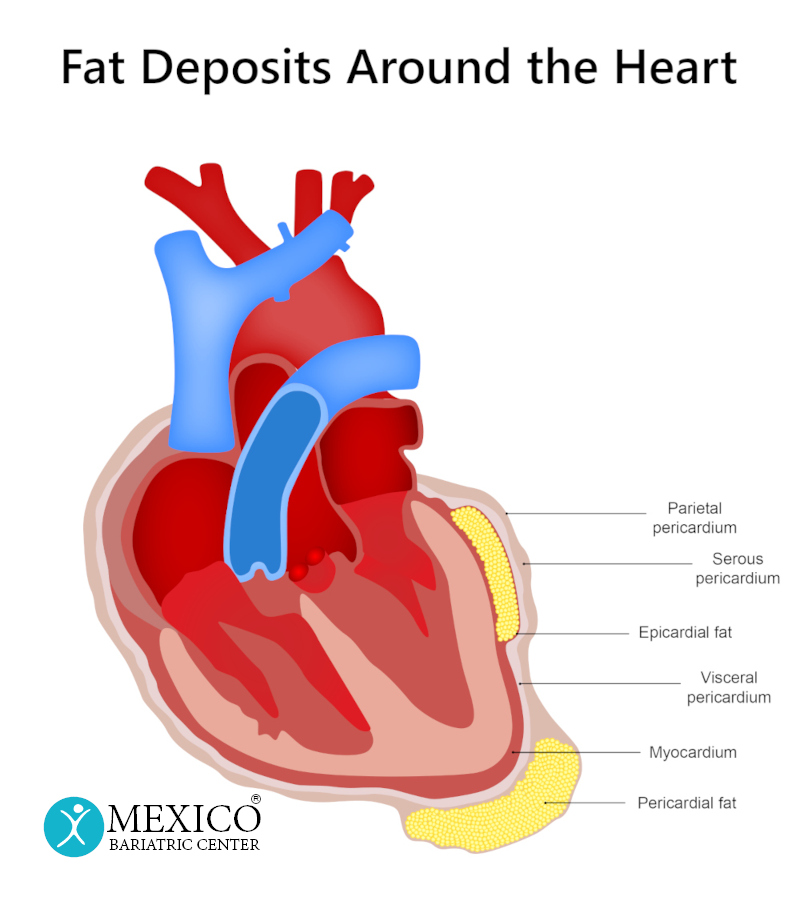 First, we need to uncover the 3 prefixes used in medical terminology: epi-, on, upon, over … para-, besides, beyond, around … peri-, surrounding (outer).

Risks of Paracardial vs. Epicardial Fat

The anti-inflammatory cytokine that improves insulin sensitivity is known as adiponectin. This substance reduces the circulation of fatty acids and is responsible for triglyceride content in various muscles.

Adiponectin quantity is less prominent in overweight and obese people who are at risk for debilitating heart issues. The adiponectin amounts are reduced while the levels of visceral fat, epicardial fat, and intrathoracic fat are elevated.

Bariatric surgery is the term used for weight loss surgery that helps people lose weight by minimizing how much they can eat as well as calorie absorption. Recent studies have immense success in operation for short-term and long-term success at losing weight and battling a broad range of serious diseases and medical conditions.

Bariatric surgery is shown to improve the function of Adipose Tissues.

A recent mot study investigated the type of fat decreasing the most in bariatrics showing that pericardial fat is reduced more than epicardial fat. This means the abdominal fat deposits were reduced the most following bariatric surgery, such as the Roux-en-Y gastric bypass procedure, one of the most common bariatric procedures.

The goal is that by forcing this reduction in food intake, they start losing weight. Bariatric surgery procedures include gastric bypass, lap band surgery, stomach stapling, and sleeve gastrectomy. The results and potential risks of each surgery vary based on the person getting it and what is involved in the procedure.

During this study, there was a total of 10 patients were reviewed 16 months after having the Roux-en-Y gastric bypass procedure. There were 60 percent women and 40 percent men, with the average age of patients being 53.7 years old. An MRI machine was used to measure the amount of ectopic fat accumulation, as well as the CV function.

The Myocardial Triglyceride Content (MTGC) was assessed using an MR spectroscopy device. At baseline, when the surgery was first performed, the patients’ average body mass index (BMI) was 41.3, and 16 months later, it was 34.1. There was a larger decrease in pericardial fat volume with a decline of 17.3 as opposed to 6.4 of Epicardial Fat Volume (EFV) The study also found a considerable decrease in visceral fat volume at 35.5 lower, as opposed to the subcutaneous fat volume that fell by 25.

While the research did not show the reduction of pericardial fat having a significant effect on each person’s cardiovascular function, this doesn’t mean further testing wouldn’t show benefits. Pericardial fat has long since been directly linked to cardiovascular health. Not to mention weight loss in general from the Roux-en-Y gastric bypass procedure shows significant changes in various conditions following weight loss, such as type 2 diabetes, risk of heart disease and stroke, high blood pressure, and high cholesterol levels.

Funding for this study was provided by the Netherlands Heart Foundation and was performed with help from a grant from the Dutch Obesity Clinic, using a framework at the Center for Translational Molecular Medicine. Linda D. Van Schinkel, MD, was head of the research team for this study as a medical doctor and researcher at the Leiden University Medical Center in the Netherlands.

For severely obese patients, significant surgical-induced weight loss with bariatrics is associated with a significant decrease in abdominal and pericardial fat volume and no changes in epicardial and myocardial triglyceride content. The beneficial effects of bariatric surgery on pericardial fat are likely partly responsible for the reduced cardiac death rate seen with weight loss.