Women Account For 70% of Weight Loss Surgery in Scotland

Scotland has had an obesity problem for a long time that affects both men and women. The latest statistics, however, are worrying health officials. It is no secret that excess weight causes many health dangers, such as diabetes type 2 and cardiovascular disease. The research has health professionals calling for better self-image promotion for women.

Being overweight is now a serious public health threat to the adult and children population in Scotland. Socioeconomic status plays a role in the obesity rate as well – it is higher in deprived areas.

With obesity rates being similar for both genders throughout the country, why do women feel pressured to lose weight more than their male counterparts? Why are men not put under the same pressure to lose weight? Jim Hume, a Scottish Lib Dem health spokesman, calls for the country to tackle the obesity crisis healthily and sustainably so that it doesn’t create body confidence problems for one sex. 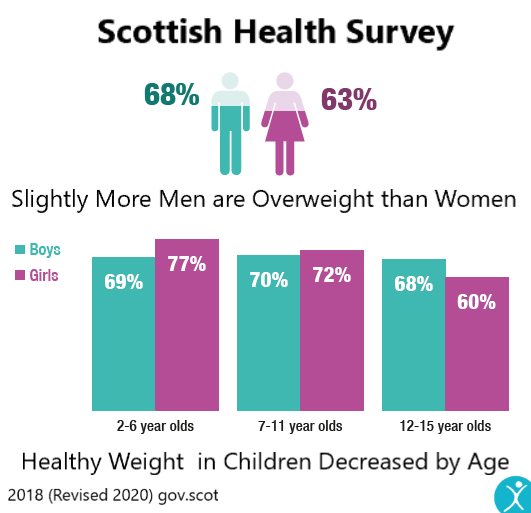 The number of both adults and children in Scotland considered to be at least overweight continues to rise. Between 1995 and 2013, the number of overweight or obese increased from 52.4% to 61.9% for individuals aged 16 to 64. Children alone are 30.6% overweight (a rise in 2012) as a whole, and nearly 17% are at risk for obesity as an adult. Approximately 258,570 people in the country were diagnosed with diabetes. Scotland is number two in the world for obesity.

Many health experts are calling for stricter laws that will stop unhealthy food ads for kids on the Internet. Current national guidelines prevent any promotion of foods that are high in sugar, salt, and fat during children’s television shows. The UK Association for the Study of Obesity wants to see the same guidelines applied to the web. They believe that action should also be taken to reduce food marketing on the internet as companies are not living up to their commitments to fight obesity in the country.

The survey looked at 881 individuals who had bariatric procedures from 2009-2013. 653 of those studied, or 74.1%, were women. That number stayed steady throughout that entire five-year period. The most significant number of weight loss surgery procedures done in 2013 was by NHS Greater Glasgow and Clyde, where 45 women and eight men had surgery. In Ayrshire and Arran, 29 men and nine men had bariatric surgery, including gastric banding and gastric bypass surgeries. Lothian saw 29 women and eight men having bariatric surgery. All of these figures come from the country’s Liberal Democrats.

Jo Swinson, a Scottish Liberal Democrat MP, is leading a body image campaign across the UK, which highlights these same pressures. She believes that if Scotland can get a grip on its obesity crisis, others might work to do the same in Europe and the world.

While the national picture of obesity shows that men and women have similar obesity rates, women seem to be taking the surgery plunge much more than men. Health professionals work directly with patients to help them make informed decisions regarding their treatment. However, Scottish Ministers want to tackle any pressure women feel to have an idealistic body image type.

Similar to Scotland, the distribution of males and females obesity is uneven in the United States of America population. U.S. females get 80 percent of bariatric surgeries vs. males, who get only 20 percent. Men who undergo surgery tend to be older with higher BMIs.

Mexico Bariatric Center® (MBC) is tackling the obesity crisis by providing reliable, affordable, all-inclusive packages to patients worldwide. Since 2012, under the direction and leadership of Ron Elli, Ph.D., MBC has serviced over 20,000 patients in successful surgeries. With seven surgical teams of the best bariatric surgeons in Mexico, MBC offers various laparoscopic and endoscopic procedures. Contact our experienced coordinators for priority placement.